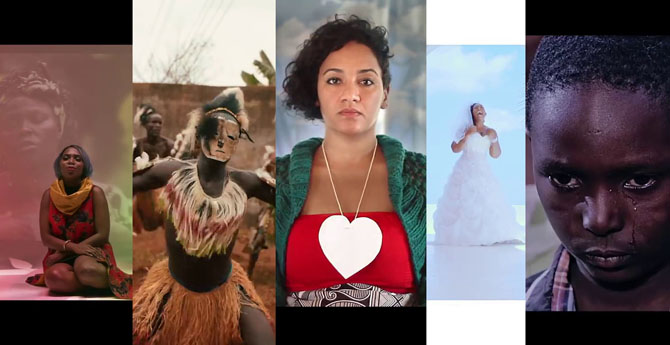 There seemed to be a saturation of ideas when it came to Kenyan music videos in 2016. With the current trend of having nearly every single an artist or band releases being accompanied by a music video, this was bound to happen. Not everyone has the time and budget to pull a Beyoncé. Perhaps it was too few production houses handling too many music videos. I don’t know what it was, but an overwhelming number of music videos ended up looking pretty much the same and were easy to forget as a result. That being said, there were also a number of eye-catching ones with interesting concepts, solid storylines, visual oomph, and/or a high technical quality. Even where some of them did not receive the production values they deserved, it was easy to see the extra creative effort that was put into them. Here’s our annual compilation of 20 of the best music videos through 2016.

Even though Kenya has hosted the biggest refugee camps in the world for nearly 25 years, they remain faraway places to most Kenyans. The little news and media that comes from these camps and marginalized Northern regions, tend to come within the context of negative issues such as insecurity, drought, terrorism and the like. However, in such large communities, there must be positive stories; there must be some form of art and culture going on. Proof of this comes through Refugeenius, a collaborative album between rapper Octopizzo and refugee artists from all over Africa currently based in Dadaab and Kakuma; as part of the UNHCR-funded Refugee Art Project.

Flag (Flalala), performed by Mau Mau from Somalia and Be Haapy J from South Sudan gets a great music video directed by Ballzy and Gone. Through the traditional dances and their flags, we are reminded that most of these people are not here on their own free will, and that their current lives will never truly feel like home. Mau Mau and Be Haapy J find themselves peering into the horizon from atop the hills, hoping that someone will be coming from across the border with news of peace.

Just as he did with Commander in Thieves, hip hop artist Moroko Kalahari comes through with another unconventional music video, this time for  his track Form Gani which is about the dangers of drug and alcohol abuse. This is a grim and gritty tale of magical realism happening in one corner of Kibera, where a ‘Spirit of Mischief’ has just landed and is out to cause some chaos.

Those of us who were urban-based kids or teens in the 90s will definitely relate to the nostalgia this music video evokes. When the only way to keep in touch with friends was to go to the hangout spot at some secluded area of the estate. When the cool kids were the ones in oversized checked shirts and dungarees; and took off in their parents’ cars without permission. This music video captures that aesthetic so well, complete with some 90s boy band dancing styles towards the end.

The duo of Mbithi Masya on direction and Joan Poggio on editing and colour grading (the same guys who blessed us with last year’s best music video) are responsible for the richness of Kavi Pratt’s music video to Only Lover. There’s no discussion about how good this video looks. K2 has gotten himself into quite a pickle here, someone likes him way too much.

Victoria Kimani turns the sexy all the way up for the video to this track featuring Khuli Chana. The music video continues what the song started, giving subtle nods to Angelique Kidjo’s music videos to Wombo Lombo (the dance routines) and Batonga (the luminous Afro-psychedelic styling).

It is a fun-filled day out in the sun for Wambura Mitaru and friends as they bring to us another version of Wambura’s much-loved track Wewe. The good vibes and infectious energy of this music video hits you straight away.

It was only fitting that Kymo and Stigah’s funny take on the wrath of God got an equally zany, out-of-the-box music video. At a time when local gospel songs are somehow getting some extremely uninspiring music videos which prefer to play it safe, this one is a breath of fresh air.

It has been quite a while since Octopizzo dropped a music video that was not visually appealing, and the trend continues with Utanisho which was shot on location in Switzerland. The beauty of this video has less to do with originality and more to do with how to borrow certain aesthetics and use them well. That purple colour grading of the woods must have been heavily influenced by the music video to What They Want by Russ, or A$AP Mob’s Yamborghini High. At least he did it before K.O. and Okmalumkoolkat. Watch out for the wonderfully trippy mid-section of the video.

Rock band RASH make up for whatever production values their music videos lack through innovative concepts (Sons of Robots) or engaging storytelling. The video to Usiku Mbaya stays in line with the message of the song, warning against the harmful effects of consuming illicit alcohol. After a night of hard drinking, the main character awakes in the middle of nowhere and begins to retrace his steps back to his own tragic actions.

The culture of corruption and impunity which has come to define the socio-political status quo of this country tends to have personal consequences for individual Kenyans, once their turn arrives. The ugliness of it all suddenly invades the home of a young boy in this music video which ends with an Inception-like twist. The boy represents our tucked away thought that maybe we should rise up defiantly against the people who oppress us and bring about the change we deserve.

Sage finally drops a vibrant music video for her much-loved single from 2013 titled Maskini. Sage’s visual presence is so arresting, largely thanks to how she uses her eyes. Most of the time, she is staring straight at you, making you wonder “Is she singing to me? Me?” That’s until you see the hunk of a man she cuddles up to later in the video. She was just messing with your head. Poor you.

In this gorgeously shot black and white video we, the audience, are given the viewpoint of the person threatening to tempt Phy into being unfaithful in her current relationship. She tries to walk away but somehow we keep bumping into each other. It’s a great concept that unfortunately doesn’t take full advantage of its potential. The extras are too few, and some of them appear too often for the desired effect to sink in. Another main character would have helped shift the attention away from this, as seen in this alternative music video. Thankfully, the gradually emptying streets of Nairobi at night emerges as the silent co-star of this video.

It’s checkmate time for a couple who have been mutually playing around. Insecurity and infidelity walk hand in hand in this video which ends things with an exciting cliffhanger. Let’s hope the saga continues in the next video Mankind put out. Great story telling from the good folks at 365 Films.

The music video for Cece Sagini’s Kisii language single is all about the hard-fought love between two people from different clans. Sometimes, you just have to wrestle it out for your bae. Everything from the styling to the directing comes together beautifully here.

The music video to Sauti Sol’s viral single cleverly plays around with light, darkness and dramatic sweeping shots to create the kind of illusion of scale that can contain all those heavenly voices. Really good work by Joash Omondi and Mwaura Timothy.

This is Maia von Lekow’s second music video, the first being the still-memorable Jellyfish from 2013. Yes, this one is just as good as Jellyfish. Chris King combines live-action filming with stop-motion animation techniques, mirroring the intention of the song to capture excitement and anxieties taking place within us when around the people we care about.

Shot on location at the picturesque Manda and Shella bays of Lamu Island, this is a brief tale about a dream beach wedding that is slowly sailing towards a pre-mature and heartbreaking end. This video is absolutely stunning. Some of those aerial shots are simply jaw-dropping. When it comes to amazing locations for filming, the Coast region of Kenya is the gift that never stops giving.

Aloe Blacc composed Live My Life in support for the Malaria No More campaign. The visual treatment, directed by filmmaker Sam Soko of Lightbox Africa, tells a wonderful story of friendship, loss and hope. Film critic Roger Egbert once said “…movies are like a machine that generates empathy.” This music video is one heck of an empathy machine.

Dela, Sauti Sol’s Polycarp and the National Youth Orchestra’s rendition of the Kenyan national anthem gets an equally epic video directed by Mushking, bursting forth with glorious colour in the last verse. We often take it for granted how beautiful our national anthem is. This is a wonderful reminder.

Tusker Here’s To Us has been one of the most impactful ad campaigns Kenya has witnessed in a long while, only second to Niko Na Safaricom. The build-up ad presented the proposition of coming up with an anthem that would be representative of Kenya. What followed was this epic music video directed by award-winning South African filmmaker Dan Mace. Dan’s filmmaking sensibilities as seen in some of his work like Gift continue to shine through in Here’s To Us. Stephen Du Plessis also demonstrates just how important editing is in enhancing the look and feel of a music video. Resultantly, this video captures the sights and sounds of every county in Kenya in such an engaging way that its 3 minute duration whizzes by as fast as a 30 second ad. This will be a hard music-based campaign to beat.