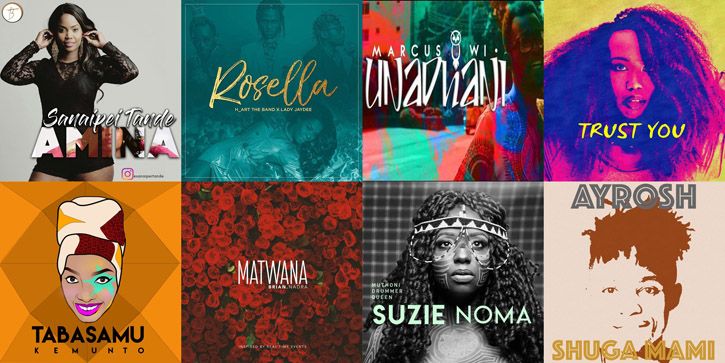 Just as was the case with 2016, the past year in music was marked by a balanced contribution from the artists on either side of the popularity divide. The usual mainstream favourites stuck to their winning formulas continued to dominate the air waves and event venues, even as less established acts innovated and further pushed the limits of what we imagine authentic Kenyan music should sound like. New and promising talents also emerged seemingly out of nowhere, already in full bloom, and blew us away with their freshness.

Here is the first part of our picks of the best 50 Kenyan songs of 2017. The second installment with the final top 25 will follow shortly.

Thingira Wa Iregi describe themselves as oral artists using hip hop as their preferred method of preserving African culture and folklore. Rapping in Gikuyu, their lyrical content centers on commentary on political and social themes such as Pan-Africanism, class struggle, corruption, poverty etc.

Their content is so dense, it may be hard to swallow in one listen, especially for a generation that has not been exposed to the likes of Immortal Technique. Just look at the translated lyric video for Thayu, for example. In an environment where most artists would rather play it safe, the decidedly political and revolutionary stance Thingira Wa Iregi take with their music is refreshing.

Since appearing on Khaligraph Jones’ 2016 cypher, getting to feature on a Jua Cali track, and releasing their Ndani Ya Cockpit mixtape, this rap duo has been gradually making serious waves. Scar and Domani also showed just how much they could stretch the limits of their unique sound in a rather entertaining rework of Drake’s One Dance. The highlight of their year was no doubt Tuko Ndani.

Band BeCa flipped around the sassy, “girls night out” vibe of their second single Brathe and exposed their vulnerable sides on Tonight. The end result is one heck of a strong ballad. Rapper Petra provides an introductory verse before the girls deliver some impressive harmonies. It’s little wonder that they swiftly graduated from being backing vocalists to featured artistes on Coke Studio Africa 2017.

There is a good reason why Chemtai Sage is most Kenyan rappers’ top choice for singing their choruses. Her hooks can either be useful in softening the typically rough edges of a hip hop song, or for going just as hard as ( and sometimes harder than) the rapper on the track.

Bobby Mapesa and Calvo Mistari brought on Sage for Master, one of the standout tracks off their first joint album released in late 2017. As expected, the hook is delicious and adds flavour to the playful verses from the rap duo. Master  effortlessly gets heads nodding.

It has been nearly four years since Mumbi dropped The End, a banger of track featuring Fadhilee Itulya. She returned in 2017 with Senses, switching up her sound from afrohouse to deep house with a South African sensibility.

2017 had its fair share of great songs paying tribute to the city in the sun, including Noel Nderitu’s No Running, but none of them hit the spot like Mayonde’s collabo with Stonee Jiwe. Mayonde’s vocals radiates all the good vibes that you would associate with Nairobi on its best days.

China Love is Victoria Kimani’s first release since parting ways with Nigeria-based record label Chocolate City. For her, the single serves as a metaphor for her transition from an environment she now considers limiting and monotonous to one of creative and financial freedom.

Drey Beats puts on a superb show on the production, sneaking in a subtle riff that sounds like it was plucked off a spaghetti western soundtrack. As a result, he provides perhaps the most fitting accompaniment for an artist returning to the Wild West of the music industry: the indie status.

Barak Jacuzzi is at the forefront of a crop of new rappers changing the face and sound of Kenyan hip hop. Flying out from under the radar with his debut mixtape The Juice Bar, Barak makes the most of his smooth lyrical delivery and his penchant for hilarious one-liners on Coco Masta. It takes someone special to reference Nick Mutuma and oompa loompas on the same bar in a way that actually makes sense.

While so many artists still couldn’t stop sampling from Murder She Wrote and other  90s/early 2000s dancehall riddims, Avril was inspired by a more contemporary dancehall sound on Babiee. The track ends up sounding fresher than most of the countless afro-dancehall tunes doing the rounds these days. What’s more, Avril brings on Ugandan dancehall sensation A Pass to add some extra sheen on an already polished production.

Despite what seemed like an unpleasant parting of ways between Steph Kapela and the Atwal Music label, Got The Sauce now serves as a bittersweet reminder of how good their creative partnership was. Kapela’s flexibility with both rapping and vocalizing shines through on this track, and he also brings with him the cadence to match the ups and downs of Atwal’s sultry beat. “I could be anything/ We could be anything/ We could do anything“ he declares triumphantly.

Otile Brown’s song writing skills, especially when it comes to Swahili love ballads, have never been in doubt. His high point for 2017 came in the form of Mapenzi Hisia. Otile smoothly distills love into its purest and most basic form in which little else matters but how you feel.

Given Yvonne Darcq’s musical versatility and her knack for multilingual lyrics, it is usually a good idea to keep an open mind when approaching her new material for the first time. Just like Ooh Lala Oui Oui, her only release of 2017 was a pleasant surprise. Effortlessly singing in four different languages, Darcq reveals to us  yet another previously unseen side of herself.

M³ was quite the busy producer last year, judging from the rather long list of artistes he managed to  work with (Kahvinya, Tetu Shani, Kemunto, Meka Mungai, Emma Cheruto, etc). That being said, Ciano Maimba’s insanely good vocals were the perfect match for his trademark groovy, Afro-Latin inspired grooves.

Singer-songwriter Nviiri thestoryteller’s Penzi took it place among the ranks of criminally underappreciated tracks released out of the radar of mainstream media. Penzi ticks all the right boxes for the perfect love song and is hopefully a sign of great things to come Nviiri.

Looking for a recipe for three and half minutes of head bobbing? Hotbox Music have it right here. Fledgling rapper Asum Garvey’s unfettered flow and sheer presence on top of a simply delectable beat easily makes Saucin’ one of the most enjoyable hip hop releases of the year.  Eat this while it’s hot.

Golden Goals was just one of the many gems produced by EA Wave’s Sichangi in 2017. Slightly different from his usual electronic re-imagining of familiar sounds, Sichangi doesn’t tinker too much with his sample of a classic hip hop beat on Golden Goals. Jason Kalinga and TAIO perform as expected in this straightforward boom bap environment.

Le Band followed up their breakthrough single featuring Suzziah with Leo with this breezy party anthem. Whether you think this track is in a territory much further from or much closer to Sauti Sol’s musical DNA, what is clear is that these lads are definitely moving in the right direction.

Marcus Wi goes after everyone’s misplaced assumptions about him with some silky raps on Unadhani. His flow locks on perfectly with the minimal hip hop beat whipped up by Playmakr, one of the steadily rising producers defining the sounds of what has come to be known as Nu Nairobi.

Amina, Sanaipei Tande’s tribute to her departed cousin, does not hold back with emotion. It’s actually amazing how Sana manages to pack in so much feels in her verses. Loss, grief, anger, redemption, closure, satisfaction, joy – somewhere within the three and a half minute duration of this song, you will find all these and more.

Sage’ presents yet another impressive vocal technique master class in Trust You. While her main and backing vocals harmonize, one can’t help but get the feeling that instead of complementing each other they are in competition. This slight clash perfectly captures the conflict between the different voices in her head and fit well with the song’s main theme of uncertainty.

Ayrosh is as smooth as smooth can get as he seductively wins over a love interest in Shuga Mami. Sounding like a John Legend who has just discovered his Kikuyu roots and backed by a funky beat that sounds like it took a time machine from the 90s, there’s no way to resist his charms.  Enjoy the sugar rush.

Kemunto and producer M³ get in the zone and join forces to kick ass and take names on Tabasamu. One can’t help but crack a smile and groove to this beautiful track.

Yeah, yeah, yeah – we all know the ONE song about matatus worth raving about of late  is Mat Za  Ronga. That being said, Brain Nadra makes a pretty convincing case to the contrary with Matwana. He sets up the flashy, rough-riding, and risk-taking PSVs as a cheeky analogy for passionate lovemaking. Not bad at all.

H_art the Band and Lady Jaydee vocalize the tug of war between separation and reconciliation that plays out in relationships at their critical make-or-break moment. Rosella comes across as an effective Kenya-Tanzania collaboration worth repeating as soon as possible.

MDQ’s third single off her upcoming album, Suzie Noma takes no (male) prisoners. This is a celebration of the female experience in Africa: their unique bonds and their triumphs against the crazy odds that society sets up against women. The boys waiting outside to be let into the party are dismissed with a sassy “Mtangoja, leo mtangoja.” Enough said.