The best Pan-African music themed show in recent memory, Coke Studio Africa is back on our TV screens for a third season. The premiere episode kicked things off on 11th October 2015 with so many new bells and whistles, it hardly resembles the simple format it had way back in the first season.

Other than the artistes Season 3 will also spare some time to focus on the insanely gifted producers and band members including: The music director running things this season is Zwai Bala from the kwaito pioneering group TKZee (Fiasco, Dlala Mpantsula etc.).

The theme of this season is mashups, which basically means blending two or more songs together in a coherent, enjoyable way and to bring out aspects and angles to the songs that you’d probably not get while listening to the original compositions.  What makes a great mashup entails how well the tracks gel thematically, lyrically and of course making it sound like its own creature and not merely glued together.

The type of mashing up that happens in Coke Studio Africa is more of remixing and reworking the tracks to make them sound worthy of a live performance. It’s certainly not the pure art of classic mashups/bootlegs which entails working with original vocals from Track A +  original instrumentals from Track B + a bit of magic like you would hear in The Grey Album, from the stuff at Mashstix, or even that very epic Imagine Dragons – Kendrick Lamar performance.

Another new feature brought in this season which may also attract discussions on semantics is the Coke Studio Cypher, which isn’t really a cypher in the strictest sense of the word. Hip hop purists will probably say the entire structure and point of a cypher is a group of rappers freestyling together.

The other new feature is CokeTales where we get to hear some of the origin stories of our featured artistes. The feature starts off superbly with Victoria Kimani speaking about her experiences with the perception on her image and the persistence of the ‘brown paper bag test‘ in America.

Yet ANOTHER new feature is the Coke Studio Showcase in which the artistes go acoustic and let their vocal abilities shine. Chidinma can do no wrong here, obviously.

Moving on to the core of the show, the mashups, viewers now get to vote to determine which tracks will eventually end up in a compilation album.  Most of the mashups of the episode worked pretty well, with Sauti Sol and Yemi Alade opening for a satisfactory mashup of Temperature and Shake Yo Bam Bam. The major standout however was Kigozi/Swag by and produced by Jaaz Odongo who put in all the right ingredients for a live performance, from Kato Change’s hair raising guitar solo to a choir at the end.  It was lit, for sure.

Zwai Bala and Kevin Provoke also broke through with an interesting pairing of Chameleone’s Valu Valu and Eva’s Sugar, two songs that are an instant match thematically. The resulting unplugged performance was a mix of rough and tender that is not ordinarily supposed to work together, just like a rose and its thorns.

The only mashup that didn’t gel as well was MI and Avril’s produced by the Unknown DJ . MI’s Bullion Van overwhelmed the entire production. It literally crashed into Missing You in a musical hit and run and moved on at a tempo that left Avril’s track trying to catch up. Well, that’s how it’s supposed to feel when you’re home alone and everyone’s popping bottles in the club. . 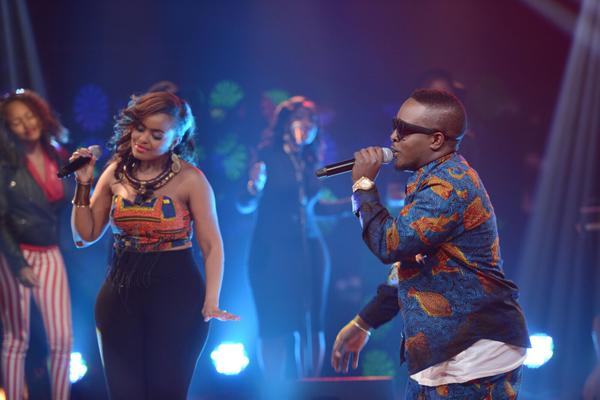 The show capped off with All I Need To Know, a brand new collaboration between 2 Face and Vanessa Mdee produced by Cobhams Asuquo. Catchy, well written and with lots of anthem-potential, it is easily the track of the episode deserving of automatic inclusion into the compilation album.

Coke Studio Africa has stepped up a few notches higher with tons and tons of awesome new features, a refreshing new format and a line-up of artistes that do not usually disappoint when it comes to live performances. If you need a reason to turn on your TV on Sunday night, this is it.