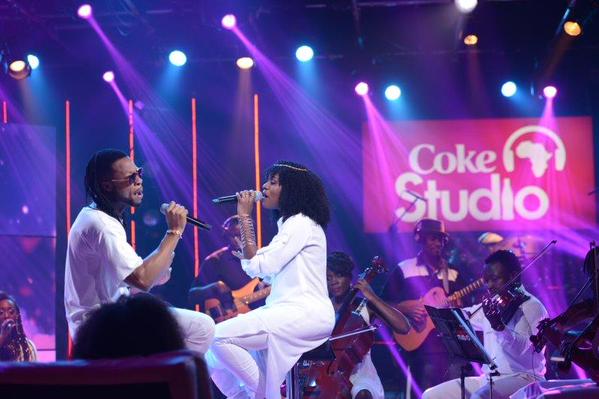 Episode 2 of Coke Studio Africa was a study in cohesion.  All the featured songs seemed to have found their natural partner. This, combined with the visions of the respective producers and the artists’ own concerns with not letting their original compositions down, gave birth to some very agreeable mashups from a thematic and production point of view.

In as much as things kicked off with a warm Kina Marabenta / Skelemba mashup by Neymar and Olamide, viewers who had cleared out their living rooms to make space for dancing their butts off didn’t get to do much of that. This episode was largely calmer than your average mid to high energy Coke Studio Africa episode, primarily because a huge chunk of the tracks were come-hither love songs, made even tenderer by the mashups.

Wangechi and Tanzania’s Ben Pol came together for a Do For Love / Ningefanyaje mashup produced by the very versatile Silvastone. Now, Silvastone is one artiste/producer who has sort of dipped his hands in all sorts of musical influences to give them his distinct flavor of Afrobeats. He’s worked with everyone from D’banj to Emmanuel Jal and whipped up some stellar remixes of tracks by Mark Morrison and even the excellent Ethiopian girl-band Yegna. His showcase in this episode will give you an idea:

The mashup that was most up to form was the unplugged duet between Flavour and Juliana Kanyamozi, who seemed to have taken great concern that their performance didn’t fall short. They put in the work and what resulted was a beautiful mashup of Ololufe and Haturudi Nyuma. Of course, any track unplugged tends to sound better, but this was more than better. It was beautiful.

The best moment of the episode however was Hernani Da Silva and Di’Ja’s performance. The Unknown DJ , who seems to have a knack of taking or getting the more experimental /riskier production tasks, worked up some magic to bring together Hernani’s Intro and Di’ja’s Dorobucci for a super-cohesive mashup that let both tracks shine equally. The battle of the sexes performance will definitely be one of the most memorable things about this season. This could work as the intro track for the Coke Studio Africa album, by the way.

Vanessa Mdee’s showcase performance of Pearls by the incomparable Sade could bring back some memories of the 90s (if you are old enough). It will probably bring back memories of that controversial Live Aid mega-concert in 1985 for the devastating famine in Ethiopia which started the trend of trying to solve global (more like African) humanitarian crises by throwing big parties. Check out Sade on the original track.

On a different note, do you want to know what explains the lack of South African artistes in season 3? Well, South Africa has its own version of the Coke Studio franchise at the moment. The first season of Coke Studio South Africa premiered on August 24, 2015. That should probably tell you a thing or two about how insular South Africa’s market is. Anyway, check out the Coke Studio ZA YouTube channel for a taste of what’s happening down south.