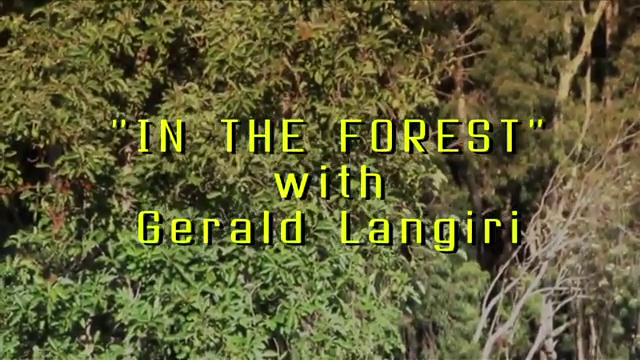 In The Forest with Gerald Langiri: A Lot of Monkey Business

This is a raunchy talk show from hell, hosted in a way only Gerald Langiri can.

There is no simple way of describing this web series – right from the opening sequence where we are confronted by shots of budding actor Gerald Langiri apparently taking a dump behind a bush, it becomes obvious that this is no ordinary talk show. What happens is that every week or so, the guys at Historia Films let Gerald interview a local celebrity in some of  the most bizarre manners. Gerald does not take this rare privilege for granted and goes all out to ensure his ‘victims’ go through a strange experience. He is willing to pull all manner of stunts from asking uncomfortable personal questions to walking out mid-interview. So far, his shenanigans have earned him a slap and more are on the way for sure.

What is the point of all this, you ask? From the looks of it, there’s never really a point to begin with. The resulting product feels like a parody of all the local magazine TV shows that keep their questions within the limit of what can be termed as “safe”. All in all, it is a weird, but strangely entertaining mess.  It is one of those shows you find yourself watching to the end without understanding why you did it at all. It also helps that the length of every episode is kept under 9 minutes – anything longer than that would definitely kill the vibe. You will not be seeing this on free-to-air TV anytime soon – the content and language used here is pretty mature.

Gerald Langiri does a good job of playing the quirky host and has no problem escalating already uncomfortable situations. He will remind many of relatives who behave as if they are hitting on you at family gatherings. Yes, it is that unsettling. The man behind the camera and the editing of the show, Alex Konstantaras makes it very clear that he has no intention to improve the raw footage as evidenced by the choice of ugly fonts for the credits and the strange gypsy music used. Perhaps this is all intentional, but it is hard to tell.

Watch all the episodes out so far on the Historia Films YouTube channel.

My gut tells me that this series is part of Historia Films’ strategy to promote their up-coming sex comedy flick, House of Lungula which is projected for release in mid-June. That being said, I am crossing my fingers and hoping the film will not be an extended version of this series. Overkill has never been good for anybody.