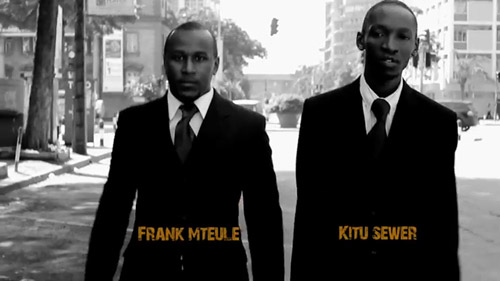 We are halfway into the year 2013 yet half of this period was spent on deciding our next leaders for a new system of government with complications of its own. We slayed each other on social media and in courtrooms with no immediate solution to end the deep divisions that the process has caused. The last quarter of this half-year has been spent talking about what our political leaders deserve now that they have successfully made it into government – who deserves what office, who deserves a flag on his/her car, who deserves what salaries, who deserves what VIP lounge at the airport etc. The release of this song comes at a crucial time whereby the dialogue needs to change significantly from what they deserve to what we, the common mwananchi, think we deserve.

The purveyor of this crucial message is none other than Kitu Sewer The Poet (one half of legendary hip hop duo Mashifta) and Frank Mteule. Anyone who has listened to Mashifta’s music from way back when (such as Pesa Pombe Siasa Na Wanawake and System Ya Majambazi) knows what to expect – a gritty, unsweetened yet accurate piece of social commentary on the state of politics in this country. Both emcees kill their verse with witty lines and a touch of satire that would even make the greats like Chinua Achebe proud, more so Kitu Sewer’s verse which proves that he is still one of the best lyricists Kenya has ever produced. The production is quite reminiscent of stuff from Kenya’s Hip Hop Golden Age – it’s very minimal and subtle in a way that gives prominence to the message.

The video, done through Big Ideas Productions, is also a subtle piece of satire in itself. The two are dressed in sharp suits looking like they have somewhere really important to be but are instead hanging around tao’s back alleys and reading newspapers – we see people like this everyday, walking into town to look for jobs that they rarely find and instead resort to the Bunge la Wananchi groups that mill around newspaper stands discussing politics of the day way better than the talking heads on TV ever can. Kitu Sewer and Frank ask, what is the point of all this? What?

This is a jolting indictment of the political class and a call on all Kenyans to put them to account. In fact, every Kenyan should wake up to this song as a reminder of how far our political leaders have gotten with their politricks.