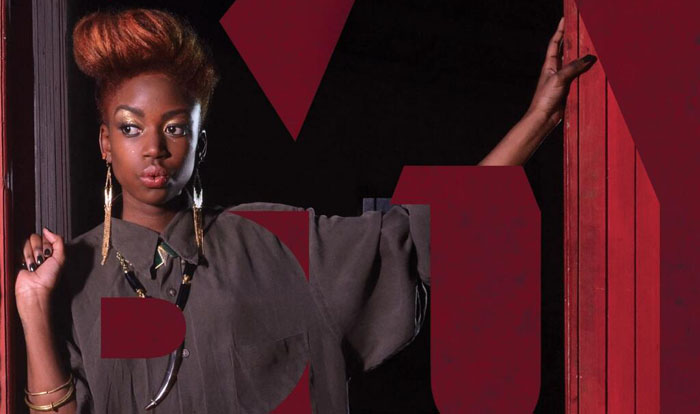 I’m finding it very difficult not to compare Lady Karun’s career progression with that of Justin Timberlake. Her identity as one of the main focal points of Camp Mulla,  a very successful musical group (by Kenyan standards) is difficult to shed off, like Justin’s was with ‘N Sync back in the day. Justin’s Grammy-winning debut album, Justified, with its line-up of maturer singles and a couple of solid ballads seemed to do the trick for him and almost immediately distinguished his brand from his former boy-band image. Well, after nearly 3 months of studio time and a bunch of teasers for her fans, Lady Karun is on a similar path with the release of her debut album Karun on Friday via waabeh.com.

Karun is also similar to Justified in production style but diverges when it comes to execution – Justin Timberlake preferred to expose his “grown” self gradually as one listens deeper into the album while Lady Karun goes all out from the get go, preferring to start with the tracks that reveal her most underexposed side first. Produced by Jaaz Odongo and Kagwe Mungai at the Sound Mind studio, the album comprises of two themes, Moon and Sun (hence the two circular thingys on the album cover, you get?) – each with seven tracks. It kicks off on the Moon side of things – an emotional, soulful and maturer side of her bursts through the seven tracks. As predicted, the Moon side is comprised of some smooth R&B numbers such as Backseat, Roadtrip and SOS but is not devoid of variety in the production. Finally featuring Jaaz Odongo is an immediate stand-out in the Moon side, a coming-of-age ballad mainly accompanied by a piano led instrumental that is such a pleasure to listen to over and over again. The entire composition from the arrangement to the lyrical content literally grabs you by the heartstrings and demands your attention. It truly defines the message that Karun wants to put across in the Moon side.

Dream Awake featuring guitar maestro Kato Change (with whom she made the Last Time cover) is another interesting acoustic tune where the songwriting shines yet again. The versatility continues in the next track which drifts into a smooth jazzy-soulful place with a live version of Backseat and concludes with an equally impressive interlude that is at one point or the other immersed in almost-angry hip hop, trap, dubstep and jungle beats which Karun still manages to soften an feminize with her vocals. The interlude is so damn good I wish it would have been a proper song complete with a fitting rap collaboration somewhere in there or something.

Moving on to the Sun side of things, the rest of the album is more relaxed and fun from the twerk-inducing banger Rump complete with references to P. Unit’s That Dendai  to futuristic afrobeats alongside the deadly Dutch combination of Kagwe and Fena in Aii Yawa. One of the most notable tracks on that side is Me Myself & I, a girl-power tune that also addresses her naysayers – and she didn’t even have to mention who would be attending her album listening party. The “sunniest” track out of the whole bunch is Ay Oh, a melting pot of so many sounds – the African flute, the sitar, indian drums and early 90s house music influences deliciously blend into one another. Once you start enjoying one sound the track moves on to the next one before you are satisfied, guaranteeing repeated listening – musical crack is the only way to describe that track, honestly.

There is an overwhelming sense of control throughout the album, particularly on the Moon side – which helps the whole album be very focused and cohesive. However, such an approach of minimalist production if not carefully executed tends to come up with a highly predictable album in the long run. Luckily, Karun evades this trap by playing around with genres and therefore retaining some listener attention throughout. On the other hand it is difficult to say if Lady Karun sufficiently stretched her vocal abilities on some of the emotionally-charged tracks – heck, we’ve never heard her sound like this before. Generally, her vocal performance is solid for the hour-long duration of the album. The lyrical content is also quite commendable (no credits information out about that yet, so we cannot discuss that aspect much). Collaborations were kept strictly in-house which is not a bad thing for Karun who already made it clear that the album is all about “Me Myself and I”. That being said, the album is a different, refreshing and enjoyable listen throughout.

There is no doubt that the girl we once only knew for her hooks and choruses on Camp Mulla tracks has blossomed into quite a formidable artist in her own right. This is one of the most solid debut album releases Kenya has seen in a long time. Some of the track off this album are well on their way to becoming timeless gems that will still be enjoyed years later. Hopefully, the release of Karun will also give the local music scene a push towards less exploited and alternative genres for that much needed international appeal that this album possesses. If the current stats are anything to go by, it could as well make best-selling numbers for online sales and hopefully also further promote the culture of buying local music. Go to waabeh.com and buy the album NOW! It is great value for your 560 bob.