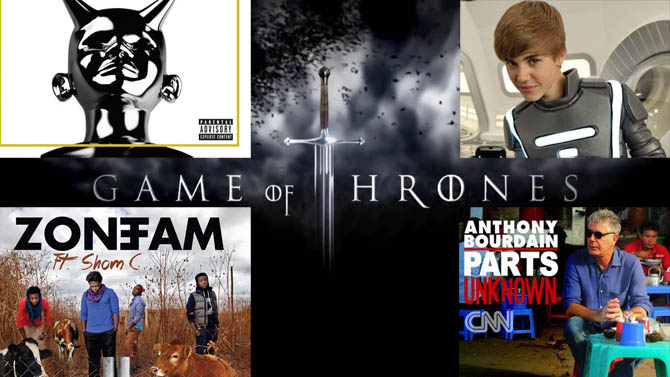 Two events went down last week, both raising very worrying questions for the whole world to deal with. Yes, it was World Environment Day last Wednesday – how many trees did you hug in gratitude? Hmm? None? Okay… Anyway the theme for this year’s Environment Day had everything to do with watching what we eat and how your choices impact the environment. For those of us who have not read the series of books that Game of Thrones is based on, eating our TV screens looked like a very good choice after watching Episode 9 of Season 3 – now known as “The Red Wedding”. That has got to be the hugest worldwide WTF moment on TV in a very very long time – my goodness that was GENOCIDE!!! They killed almost EVERYONE who mattered, kotdamn!!! The only way to explain what happened without spoiling it for those with slow internet is this compilation video of reactions to The Red Wedding:

Season 3 of Game of Thrones ends today on a high, riding on the horrific events of the preceding episodes. Speaking of finales, Season One of CNN’s extreme travel/foodie series Anthony Bourdain: Parts Unknown comes to a close this week in the dense forests of the Congo. For those even remotely hoping that the show would shoot an episode in Kenya, more so Nairobi, it must feel like Obama all over again. But then again, if Anthony Bourdain ever came to Kenya, he would most likely end up somewhere extreme like Turkana. The secret could be changing the name of this Facebook Group if we want to attract any attention. Hit LIKE for now.

In other news, J. Cole’s highly anticipated album leaked 3 days ago – it’s called Born Sinner so do not feel guilty for copping it off the internets at no charge. Repenting is for much later, friends. The real deal is slated for release on June 18 , the same day as Kanye’s Yeezus  so watch out for the deluxe version then. Speaking of free releases, Zonefam of the Contolola fame have just dropped two singles in one go. You can listen to or download Propeller and Lobola off their Soundcloud page.

KTN Adds Twist To Prime-Time TV Through “The Bible” Series

Finally, in what seems to be a last ditch attempt to get away from his completely insane fans for even one second, Justin Bieber has signed up for one of Sir Richard Branson’s commercial space flights.  The Programme dubbed Virgin Galatic  has already attracted the likes of celebrities such as Brangelina, Tom Hanks, Ashton Kutcher and Lenardo Dicaprio. A ticket is priced in the neighbourhood of $250,000 – not too steep for Bieber, who can afford another ticket for his recently confiscated pet monkey. Monkeys don’t need vaccines to go to space, right?

If you’ve Watched Game of Thrones S03E09 this is for you: