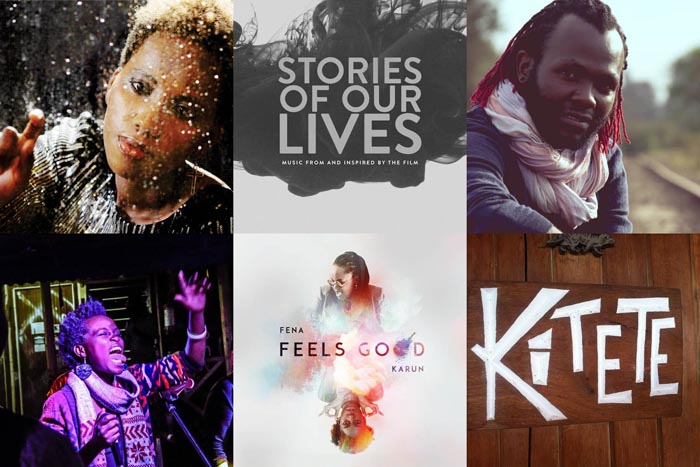 Here are some new and noteworthy audio releases from the past couple of weeks or so:

This track comes off Liron’s new album Prodigal’s Diary, available digitally on Waabeh. It is a very timely release for those who haven’t heard her live. Her next gig dubbed Evenings With Liron – Chapter II  will be at the Michael Joseph Centre on October 24. This is just a taste of the acoustic awesomeness she has in store next  week so (obviously!) Evenings With Liron II an event worth gracing.

Stories of Our Lives (OST) – The NEST

One of the hot topics over the past two weeks has been Stories Of Our Lives, a film by The NEST collective. The film is the culmination of a project of the same name  that sought to collect a range of stories from Kenyans identifying as gay, lesbian, bisexual, transgender and intersex. The film subsequently got banned by The Kenya Film Classification Board on the basis of “promoting homosexuality” and the Executive Producer arrested a week later on the charge of filming without a licence. Controversy aside, the soundtrack to this film (primarily composed by Jim Chuchu) is nothing short of amazing, and perhaps an indicator of how good the movie could actually be.  Sample it below and be blown away.

Following the positive reception of Nipe Pendo, the soulful Andrew Wambua is back with Mistaken which is all about universal and unconditional love. While you’re at it, also check out what Kagwe Mungai did to Mangulet – pretty awesome, huh?

When Fena and Karun come together to make some music, the obvious expectation is that it will sound good. Feels Good, produced by none other than Jaaz Odongo, definitely sounds good and is off her debut album Fenamenon available on Waabeh and on iTunes.

Fusion band Yellow Light Machine have a couple of glorious offerings for when you want to take it down a notch and just chill. Take a listen to their double release of Today and Funk Master General. The tracks showcase just how well-rounded the band is. It’s not just about the grooves here. There are moments of lyrical brilliance in there too.

Santuri Safari and Sarabi are in the process of whipping up a collabo track entitled Koko’s Vibration. No, it doesn’t sound anything like KooKoo and will probably evoke a much more groovier feeling.  Check out a snippet of the upcoming release recorded at this year’s Rift Valley Festival below: