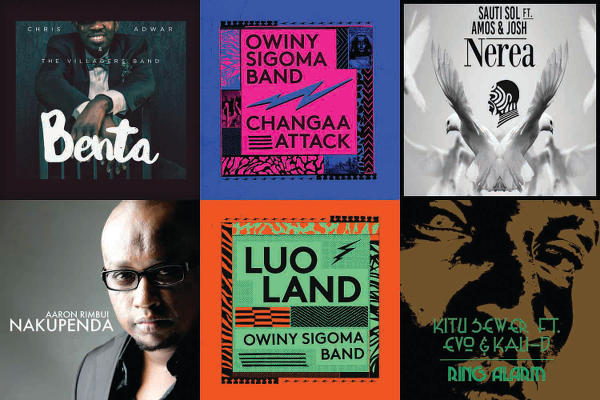 Owiny Sigoma Band are gearing up to release their third full length album called Nyanza, riding on the success of their first two LPs – Owiny Sigoma Band and Power Punch. Based on the first two singles off Nyanza, the Kenya/UK collaboration is growing from strength to strength. Luo Land  and Changaa Attack are some seriously trippy, soundclashing tunes that the band recorded on the fly in a drunken 12 hour jam session in Kisumu. Some kids were even “comandeered” to chant a few phrases for the Changaa Attack  chorus. The resulting products are really good:

Chris Adwar and The Villagers Band switches things up a gear or two with a Kamba-style Benga offering in Benta. And it’s all about that mesmerizing Kenyan woman that has been sang about for decades now. Clearly, the classic sounds don’t lose their shine, they only require someone to polish them once in a while. Chris Adwar and  have done just that.

Speaking of classics, Aaron “Keys” Rimbui’s re-imagination of the timeless Nakupenda  by the Safari Sounds Band is yet another of his gems worth playing over and over again. While you’re at it, check out his version of Sauti Sol’s Lazizi.

Speaking of re-imaginations, Ring Alarm  sees producer St. Evo take a break from his normal equatorial house offerings for a bit of hip hop this time around. This is basically a remix of Kali D and Kitu Sewer’s Kashfa Lawama.

Speaking of remixes, the Kenani bootleg remix of Sauti Sol’s controversial track Nerea has been out for a while now. Kenani gives Nerea the tropical house treatment that is experiencing a surge in popularity across dance floors worldwide. Some say this sounds better than the original, even with the suppressed vocals. You be the judge.