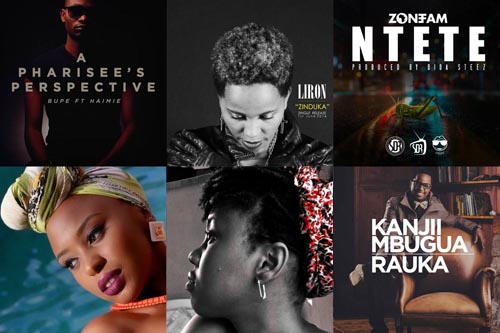 Madaraka Day is always a good day to drop a single or an album, so long as it is relevant to the day.  The ever-rising singer Liron was able to do exactly that with her latest single called Zinduka. She tackles very heavy political and social issues on this track that should make Kenyans reflect on where we are as a nation, 51 years on.  Check out this superb track below.

Kanjii Mbugua was also a busy man this past couple of weeks. He dropped by The Trend and made it a very  entertaining episode. He’s also dropped his first visual treat off his brand new worship album Rauka – the music video to Mfalme Mkuu featuring Enid Moraa (check it out above). He promises more videos around the album in the coming days, so look out for that as well.

We haven’t heard much from this afro-soul singer, but we certainly like her spanking new offering called Sitaki. One of the best songs to dump someone with, no hard feelings. Looking forward to the music video treatment of this track.

Gospel rapper Christopher Bupe has hooked up with singer Haimie on the title track to his upcoming album, A Pharisee’s Perspective whose release had been postponed to polish it further. A listen to the lyrical effort and unique chorus on this track confirms that the album will be very interesting.

Kaz rarely (or rather never?) gets it wrong musically speaking. After some silence since her collabo with Sage, she’s once again surfaced with a GEM of track called Niokoe. If you haven’t listened to this glorious zouk-influenced love song produced by Red Republik’s Majic Mike, you’re doing yourself some great injustice!

ZoneFam are set to release their latest album which will be entitled Barcode. As the title suggests, the album is supposed lean more on their core hip-hop sound that elevated them to their current star status. Along with that announcement, comes their latest single, Ntete, proving that the lads mean business.