Life, as we currently know it, is but a series of highs and lows, feats and failures, mistakes and miracles – perhaps Nature’s way of helping us grow stronger and discover ourselves. Shit Happens, an ongoing web series written by Maina Mundi and directed by Gerald Langiri (House of Lungula, Fundi-mentals) dwells on the low points of life with the objective of highlighting the hilariousness that can accompany with being down on your luck.

Gerald Langiri stars as G, an average working class Kenyan whose life takes a hilarious turn for the worse. A series of mishaps destroys his reputation at work and consequently gets him fired. Unfortunately (or funnily), shit keeps hitting the fan from then on. Every episode heaps a heavier pile of misfortunes upon G that by and large make for an entertaining watch. The series is peppered with the usual raunchy and sexually charged situations that come with just about any show classified as adult entertainment. If you have seen House of Lungula or In The Forest With Gerald Langiri  then you’ll know what to expect. 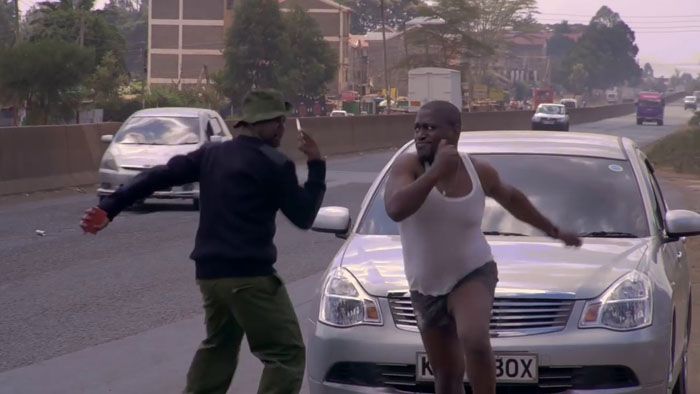 Since the story underlying the series is mainly semi-silent and plot-driven, there isn’t much heavy lifting the actors have to do in terms of character building; save for the main character’s role which Langiri pulls off quite well. There are also brief flashes of great performances by Shirleen Wangari (Tahidi High, Shuga) and Paul Mbuvi (XYZ Show).

This web series is not a bad way to spend 5-8 minutes of your time. The tightly packed plot of each episode is its strong point. Shit Happens manages to be short enough to maintain its audience’s attention span but also long enough tell a hilarious bite-sized story each time. Mundi and Langiri plan to deliver a new episode every month for the foreseeable future so it will be interesting to see just how much shit they can make happen.