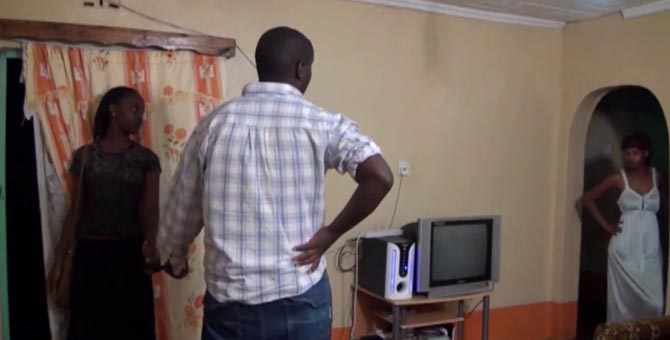 Andrew caught between his choice and his mother's choice

Stories in an African setting usually tend to portray the countryside as a place still clinging on to past practices and ideas while urban areas come across as places of freedom of discovery. Characters exposed to both sides of this divide tend to encounter pretty much the same challenges as they try to figure out how to live with and without all the traditions and norms their community has practised for ages. This is the central theme of the drama film Sidetracked directed by Mwendwa Mutua under the Artskills Films production house.

Set in an idyllic countryside somewhere in Kambaland, Sidetracked revolves around Andrew (Denis Kamba) who is doing pretty well for himself being his own boss. His small business is running smoothly and his relationship with the  open-minded Recheal (Muthoni Thiong’o) is getting serious.  However, Andrew’s mother (Amina Mohamed Athman) is not thrilled by the woman her son is dating because she is from another tribe. She instead prefers Risper (Faith Martn), Andrew’s former fling and local girl, as her future daughter-in-law. Andrew’s mother determination to get rid of Recheal and have Risper take her place sets the stage for a tragic turn of events.

Such a premise has the potential of  providing for a lot of drama and intrigue – something that Sidetracked does not take full advantage of. Instead of proper twists and turns in the plot, it is overpowered by the relaxed gichagi setting and meanders rather lazily from one stage to the next right up to the most interesting bit which lasts only about five minutes, leaving you high and dry. It tries to follow the naija format of hour long films with crazy cliffhangers at the end, so as to justify a part 2, and even a part 3 with some success. However, the climax inexplicably sneaks up on you and terminates the film before you can say “Haiya!”or “Ai!”

Despite its short running time of 53 minutes, the film has several unnecessary filler scenes that do not add value to the storyline and end up consuming time that would have been better invested in the climax. It would not be unjustified for one to be more engaged by the soundtrack than scenes of Recheal day dreaming for a good two minutes, for example.  As a result, the film comes off as having a two and a half act structure instead of the three act structure that it was undoubtedly aiming for.

That being said, Sidetracked still has enough touches of drama and comedy for a free afternoon’s entertainment. The usual intrigues of a semi-love triangle created by a determined parent are introduced in the film’s own relaxed way. The cast’s performance is also okay, led by Riverwood Award winner Muthoni Thiong’o and Amina Mohamed Athman who does a good job of playing Andrew’s scornful and controlling mother.

Sidetracked showed a hint of promise, but failed to deliver a final proper blow at the end because the ending was simply too short and showed up out of thin air. Perhaps there are plans for a sequel, who knows? This being one of Artskills Films first forays into feature length films, the production house has since moved a step up in quality as seen in  their latest film, Tamed. For them, Sidetracked  could be a distant memory of much simpler times.