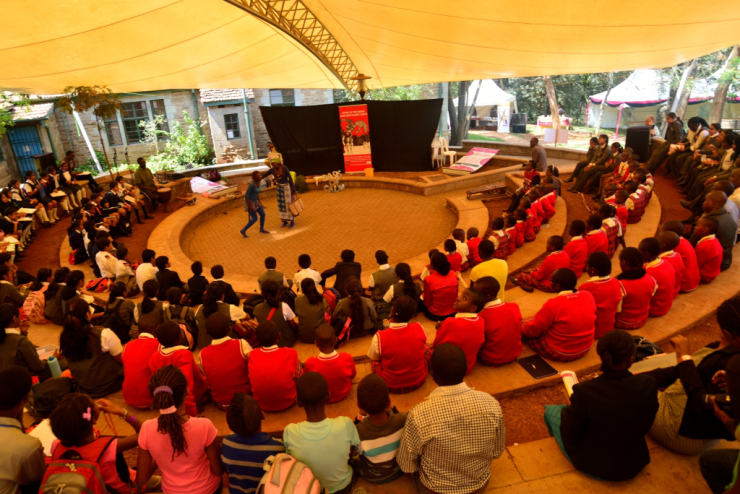 Imagine a great day that never ends, that simply stretches out into forever like a horizon reaching for its end. Festivals, which are essentially composed of good times and memories, are probably the only events that offer us a little parenthesis of that eternity that tends to go on for days yet echo into the future after it. We are still vibrating in excitement as once again the Storymoja Festival had us reeling and grinning in our seats this year at the Nairobi National Museum from Wednesday 17th to Sunday 21st.

If history is anything to go by then it’s evidently clear as crystal that the Storymoja Festival since its inception in 2007 is by no means ‘just’ a festival. It has gained international acclamation as a world class event that provides a platform to both showcase and celebrate the beauty of art and literature by bringing together great minds, ideas and cultures in form of narrators, writers, poets and creative artists. Through local and international collaborations, the Storymoja Festival this year was set to nourish the minds and souls of the young and the old. To me, it tasted like sweet vanilla cake batter you lick off a spoon and cannot have enough of…to say the least.

This year’s festival theme was #ImagineTheWorld which seamlessly intertwined with a special tribute that throughout the programme honored the lives and memories of many such as Professor Kofi Awoonor, one of Africa’s revered poets, who passed away on 21st September 2013 at the tragic Westgate Mall siege. #ImagineTheWorld, therefore was a theme that demanded some kind of realignment, shift of perception towards a better world; one that would not sustain events such as the aforementioned tragedy.

Professor Wole Soyinka, a renowned Nigerian playwright, political activist and the 1986 Nobel prize winner for literature was the headline guest at the Storymoja Festival this year. Also in attendance were award winning stars such as Dizraeli (UK), Vuyelwa Maluleke (SA),Berry Heart (Botswana), rapper L-ness (Kenya), Neal Hall (USA), Teju Cole (Nigerian) and Kwame Dawes (Jamaica/USA) to mention a few. Honestly, I would need at least a day to list and fully exhaust the names of the great people in attendance however this goes to show the commendable global community that composes the Storymoja Festival which is neither short of diversity nor creativity.

Laced across the programme, particularly in the first three days of the festival were profoundly magical events and activities designed and dedicated to students of all ages, which hailed success as attendance grew massively with each day. There was an explosion of dance, song, drama, story and poetry performances as well as workshops as students got to meet their heroes and role models such as Robert (Bob) Collymore (the CEO of Safaricom Limited), Muthoni Garland (founder of Storymoja),Joanne Ball-Burgess (writer dancer and judge of the Sakata dance competition), Aleya Kassam (Kenyan blogger and reading revolutionary) as well as Kenya’s Sauti Sol, the 2013/1014 reading ambassadors for Storymoja, just to name -another few.

This intended focus on students as the main audience was perhaps an extension to the reading revolution campaign initiated by Storymoja two years ago, formally known as ‘Start-A-Library’. Start-A-Library is a campaign whose mission is to empower children by making reading exciting and pleasurable through the Read Aloud events and Reading clubs. In addition, this campaign intends to increase access to books by forming or stocking libraries in numerous primary schools. With an estimate of over 28,000 primary schools in Kenya about 20,000 of them do not have libraries. In the two years that Start-A-Library has been in operation they have remarkably managed to open 51 libraries across Kenya.

Storymoja Festival held events this year to drive this campaign such as Kusoma ni Poa! which was the opening event that would launch the programme every day where students sang the reading anthem and the reading pledge led by children from Grace Children’s Center Choir as well as Jaza Matatu na Vitabu Music Concert whose book collection would go into stocking school libraries across the country.

The Storymoja Festival Charity Gala held on 19th Friday was no doubt the climax of this 5 day semi-pilgrimage, mind opening and inspiring programme that was not only glamourous and elegant but also intensely multi-taining. Starring at the show were Teardrops, KIU and Ayrosh (the two latter are also Start A Library reading ambassadors). There were also short performances which featured artists from Slam Africa, Kenyan to the Kore, Hisia Zetu, Nyef Nyef Nightrunners, The theater Company and Mistick Natral as well as International Performers such as Vuyelwa Maluleke who rocked the house with her spoken word awesomeness and Neal Hall who read a tribute poem to the late Prof. Kofi Awooner. There was also music by Eric Wanaina and The Best Band in Africa that had the masses on their feet moving to every beat.

In all the Storymoja events I was able to attend, knowing that in some form I’d have to review or report back to the curious minds at home and elsewhere, I was certain I had so much to say. Yet, when pen met paper, all I could regurgitate if you strip off the arrangement of paragraphs is essentially the guest list and a condensed programme; because the Storymoja Festival is not exactly an experience you can reduce and capture in just words and pictures without leaving out all the intangible fundamentals along the margins.

So like love, like music, dance, poetry and art the Storymoja Festival is an annual event that leaves you thirsty for the marvelous, the intoxication in ecstasy to escape to when ordinary life shackles you. This is the experience that is hard to bring out in an article but imagine…imagine the world and then some!