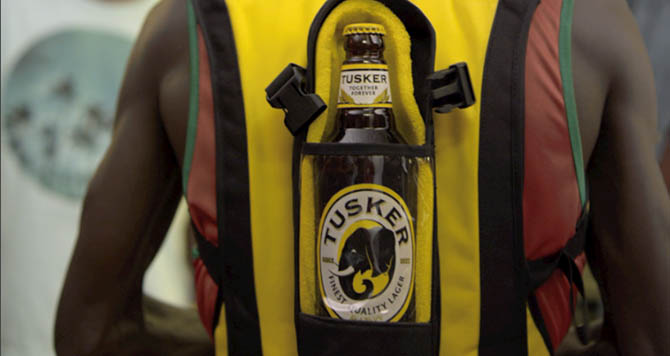 With  the gradually waning popularity of Tusker Project Fame, EABL pulled a fast one on us and teamed up with South African branded content specialists Lucky Bean Media to launch another reality show entitled Twende Kazi aimed to coincide with our celebrating 50 years of independence and to bring out the spirit of resilience and togetherness among East Africans. The show brings together 25 celebrities and pairs each of them with a non-celebrity with a mission to deliver a bottle of Tusker to Kenyan rugby star Humphrey Kayange all the way in London. That was all the introductory video had to say about the show’s concept, leaving Kenyans to imagine the rest for themselves.

Obviously, Kenyans had every reason to assume Twende Kazi would be something like The Amazing Race, a show whose format they had embraced and enjoyed for so long through NTV. This assumption is what made many viewers look forward to the show despite their doubts surrounding the objective of the show itself (going through thick and thin to deliver a beer to a fellow Kenyan in London). Many asked “Whatever for? One beer? Aren’t there shops in London that stock Tusker in quantities enough to make another version of Project X? Why can’t Kayange just walk down to Tecso’s and spend a few quid on a six pack instead of waiting 50 days for bottle from home? What is the point, really?” They asked these questions but didn’t really care about the answers because in their minds, Twende Kazi would be an epic race between the teams to see who would get the beer to Kayange first. As we later found out in the first two episodes, Twende Kazi is nothing like The Amazing Race.

Sorry folks. Twende Kazi is not a head-to-head race to the finish. It is a relay. Each team is supposed to pass the bottle to the next team at a designated point in the journey and take pictures on their way there for their “travel diary” (Eve D’Souza,  we see what you did there). On top of that, there seems to be no incentive for making it to the handover point in time or any penalty for getting there late. That piece of news crushed the unprecedented expectation levels many had about this show in one fell swoop, and like a virgin bride on her wedding realising her husband has erectile dysfunction, the thrill is gone and we are now stuck with a show we don’t really like but is basically the only thing to watch on Sunday night. How the good people behind Twende Kazi did not see how everybody from bloggers to social media “influenzas”  was framing their show as competition-based and why they did not take measures to correct the assumption is beyond me. Instead, they dropped the bombshell on us in the introductory episode and expected an overwhelmingly positive response. Ooops!

Now that the whole concept from the objective to the format of Twende Kazi does not sit well with most viewers, it is difficult for one not to spend the rest of the season looking to poke holes and find errors and scripted scenes in every episode, just to once again confirm how “unreal” this reality show is (but mainly because the viewer has nothing else to do in terms of engagement). One begins to wonder why a lady selling groceries would donate Kshs. 800 worth of product to a team right after telling them of her financial problems. One is also tempted to question how in the world a matatu driver of a 10-seater vehicle would  travel from Voi to Kaloleni with a half-empty vehicle. I could go on and on, but you get the point. Do you get the point? The point is we are not even supposed to be looking at such things!The funny thing is that most reality shows are scripted anyway, it’s just that the concept is engaging enough for viewers not to care whether it is scripted or not. The one overriding element in engaging television and film productions (especially those of a fictional nature) is their ability to make the viewer suspend all disbelief and accept whatever logic presented by the show or film, even if it makes no sense.

I am almost tempted to say that the show’s concept was rushed to stay relevant to the [email protected] theme but I can’t begin to imagine the legal and logistics NIGHTMARE these folks must have gone through to make this show a reality. Sorting out all the licensing, personnel and logistics issues to film a show of this nature in multiple countries across two continents no mean feat. Completing this show even in its current state is huge accomplishment and a landmark achievement in African television. However, this shouldn’t be an excuse for the pitfalls of the show’s concept. They just HAD to have 50 participants because we are talking about [email protected] This must have brought up the cost of producing the show exponentially, ruling out the possibility of a competitive aspect. What if they had 50 sponsors as well, including airlines and hotels from  across Africa? Would it have been a race and hence a much more epic and dramatic show? We will never know probably because  EABL just had to prove to us that it had the elephant balls to produce this show on its own. So much for the spirit of togetherness and co-operation.

It’s not all disappointments though. Tying in with the travel aspect of the show, Twende Kazi is doing pretty well with a good portion of its camera work, capturing some location shots that are guaranteed to make enduring each episode worth your time.  Episode 2 ended especially well with amazing shots at Kilifi Bridge. If there are going to be more shots like that which capture the beauty and essence of  all the places the teams will visit, there is no reason not to be hooked to this show.

I had high expectations for Twende Kazi  but the huge fumble with the format has cut whatever expectations I had down to size. It now feels like taking warm, flat beer from a house party you had one week ago. If you think about it, flat beer has many great uses, including cleaning up messes. I doubt this is a mess that can be cleaned up though.