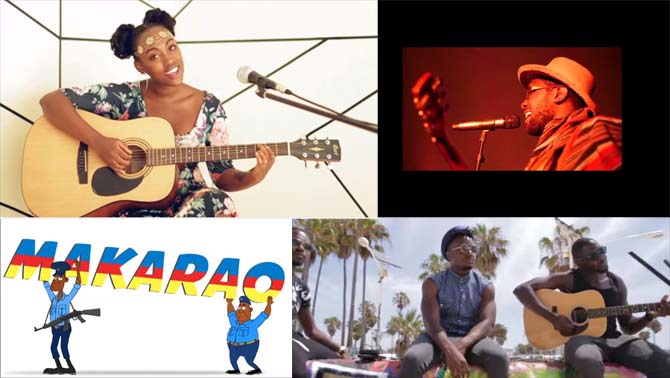 The first week of the year has not been an idle one on the entertainment front. Sauti Sol went straight back to business with a New Year release of the music video to Relax  off their brand new album Live and Die in Afrika. It’s kind of a highlight reel of the incredible year they have just had from award noms and wins to rubbing shoulders with everyone from Obama, Richard Branson and even Bill Nye!!

Mayonde is  still not out of new material, never mind that she just recently dropped the best album of 2015. She is broadening her musical styles for a project she is calling “Become a Ninja Guitarist in a Year”  – but isn’t she already? Her latest piece is called Paradise, a track that could feel right at home on the beaches of Rio or in a traffic jam in the heart of Nairobi.

No, this has nothing to do with Sportpesa. Victoria Kimani is spreading her influence into the DRC in this collaboration with Fere Gola. It’s all about forgiving and forgetting; dancing in the narrow corridors of swanky hotels and then going back to shags and doing it all again.

Tetu Shani’s unreleased track City Lights  is already getting a warm reception, if this performance at the Utam Festival is anything to go by. There’s certainly lots of good stuff to look forward to from Tetu this year.

Have you seen Alex Kirui and Alexx Mathenge’s webseries Makarao? This super-short series revolves around the day to day shenanigans of two police officers. Hopefully, Kirui and Co. will soon join Jay Mo as the first crop of web series showrunners  who’s shows finally end up on TV. With a bigger budget, this could probably make for a good 20 minute watch.