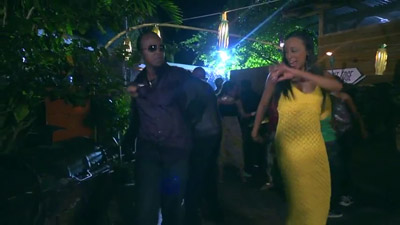 Dancehall artist Wyre has followed up his Necessary Noize reunion with Nazizi by continuing his collaboration projects with Jamaican artists. This time, he links up with Alaine and Donisha Prendergrast, probably the two female Jamaicans who are the most enthusiastic about Kenya and Kenyan culture. Entitled Nakupenda Pia, the track is a sexy dancehall tune with its own surprises –  Alaine sings half of the chorus in Swahili as Wyre drops his verse the usual way.

To some extent Nakupenda Pia almost sounds Necessary Noize-ish (the East Africa Bashment Crew phase) because of Alaine’s vocal input, more so in Swahili. This track represents the bridging of the gap between Nairobi and Kingston both musically and culturally. Of course, this is more apparent in Kenya where Jamaican artists are hosted for concerts in the country at a very high rate. Nakupenda Pia is therefore meant to bring the Kenyan scene closer to Jamaica.

The music video is directed by filmmaker Donisha Prendergast, Bob Marley’s granddaughter and shot on location in Kingston, Jamaica. For someone so deeply embedded in culture, Donisha’s influence is heavy on the concept for the video. In the vid, The Love Child flies over to Kingston to meet up with Alaine, shadowed by a dreadlocked Maasai dressed in kikoi (symbolically meant to be the cultural spirit of Kenya, I think). Alaine on the other hand is shadowed by her own “spirit” (Donisha’s cameo appearance, anyone?) also dressed in traditional wear. The two meet up in the midst of nature and KA-BOOM, the sparks fly high enough for a party scene later on.

The Rise of Queen Victoria

Hopefully this track will further increase the interest in local music abroad, especially in the Caribbean region, so that a more vibrant cultural exchange can begin in earnest.