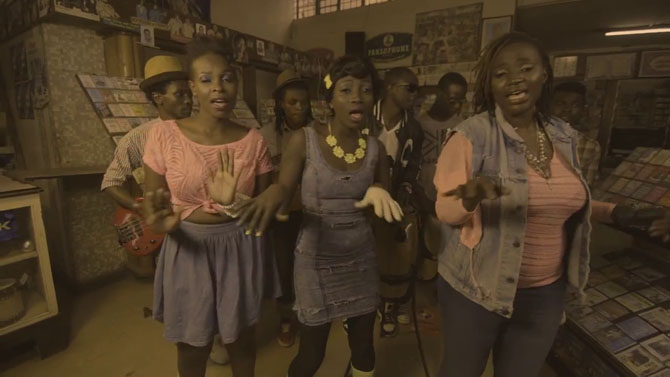 Record label Penya Africa have been churning out some proper talent for close to a decade now and don’t show any signs of turning it down any time soon.  Among their fresh and new offerings is a girl band called Kiu who started out honing their skills at Penya’s musical school, Sauti Academy, in 2013. Their live performances at events such as the BOGOF and more recently at Kings of the Arena clearly indicate that they are swiftly making their mark on the Kenyan music scene. While we have had a taste of some unfinished content such as The City,  the band’s first official release is entitled Mwanake  and also comes with a tasty music video.

Mwanake (translating to “boy” in Kikuyu) captures the feeling of  suddenly, unexpectedly and intensely falling in love and all the great things that come with such situations. As expected of any good three-piece band, the girls deliver some sumptuous vocal harmonies to go along with the backing track which effortlessly sways back and forth from Afro R&B to lingala. There is nothing to add or take away from the vocal performance and production, the finished product marries the two perfectly.

Mwende Ngao of Matotoya Films makes what we believe is her music video directoral debut on this single. The video has an overall brown-sepia tone to it for a vintage 80s feel since the concept pretty much revolves around a Kiu listening party that goes down in a parallel universe in 1983. Of course there is only so much you can do trying to maintain a period setting when shooting in modern day locations as done in Mwanake but the main location of Melodica Music Store with it’s vinyl records and cassette tapes as well as the washed out denim styling makes the video concept believable.

Mwanake is the ideal introductory single for Kiu who will hopefully continue quenching our musical thirst with equally stellar music such as this one. They are a band on the rise and one to keep a close eye on for the rest of this year.