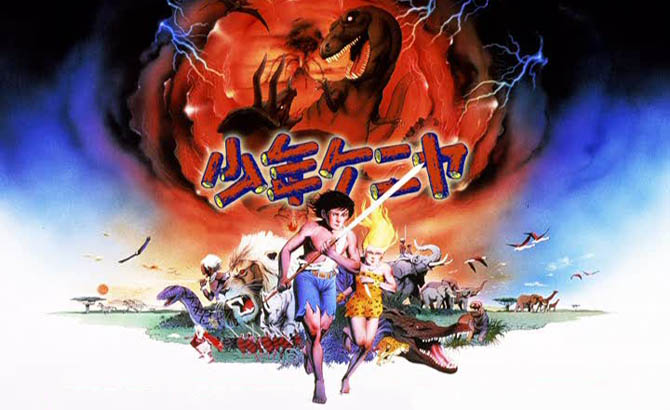 While chances of getting to see an animated feature film centred around Kenya are getting better by the day, given the increased exposure local animators and digital artists are now getting, what were the odds you’d stumble upon one in the 80s? Almost zero, right? Well, not exactly. A Japanese producer Haruki Kadokawa, couldn’t get enough of a 1950s manga comic from his childhood days called Kenya Boy  and decided to adapt it to film in 1984. He enlisted the help of film director Nobuhiko Obayashi, who was better known for his live action experimental classics such as House.

The premise of Kenya Boy is perhaps the only thing that makes complete sense: It’s 1941 and Bwana Murakami is a Japanese trader dealing in textile products in Nairobi. He decides to take his son, Wataru, on a safari to the savannah, leaving his mother behind. The timing for the trip is unfortunate because World War II is entering a new phase when Japan declares war on the Allies. They are instantly transformed into enemies on British soil. As a result, their workers abandon them in the wild, fearing being rounded up by the Brits. As if that is not bad enough, they are attacked by a rhino on steroids causing their separation. From that point onward, everything takes a really weird turn.


Wataru is thrust into all sorts of fantastic adventures that follow each other at an outrageous pace and throw the historical accuracy of the premise out of the window. He saves the life of a Maasai warrior chief called Zega who devotes his life to moulding Wataru into a full-bodied warrior and to helping him find his father. Bang on the heels of that, he rescues a Scottish girl called Kate from the clutches of a strange African tribe who think she is a goddess of some sort. He does it again when Kate is abducted by another equally zany group called the Lizard Tribe.

These adventures do not take place in the savanna you’d normally see if you visited the Masai Mara, be it today or in 1941. No, this is is a place full of lizards as big as crocodiles, a snake that can rise to the level of a ten-storey building and possibly the largest toad ever depicted on film. Never mind that later on Wataru and his friends stumble upon a Nazi research station developing the world’s first atomic bomb right in the heart of British-occupied Africa! Oh, and did I mention dinosaurs also show up for no reason at all? Think of it as Out of Africa meets Jungle Boy and they have an illegitimate son who looks like a mixture of John Carter and Jurassic Park. It’s that crazy. In fact, the climactic last 10-20 minutes of Kenya Boy is the most inexplicably trippy moment of the film, leading to more mind-blowing questions than answers.

The plot is not helped by the many inconsistent animation styles that are distributed randomly throughout the film. Before you know it, the film suddenly shifts to black and white, pencil or crayon based drawings and even pixelated 8 bit images with no direction of when to expect such changes. Some of the characters are not coloured in at all while others, like some of the warriors Wataru and Zega fight, change skin colour from black to white, just like that.

Sadly, even though there is hardly a dull moment in this film, there is hardly a sane moment either. Granted, the story could have served as good propagandist material for 1950s and 1960s Japan after their crushing defeat in World War II, but some of the undertones of jingoism and racial stereotyping come off as either hilarious or simply irritating. The natives are only too ready to recognize the strength, bravery or humility of these Japanese folk. Enemy tribesmen are portrayed as clueless bumbling fools without the capacity to come up with a sensible strategy. The fight scenes Wataru is involved in are not balanced at all, making one wonder how a recently trained Japanese boy could so easily defeat a band of African warriors in their own turf.

Kenya Boy, even with its outrageous storyline and haphazard animation, still provides an enjoyable ride, provided you concede that this is one of those films that may never make any sense at all. Watch out for those last 20 minutes! Click here to stream the film. Alternatively, there are a bunch of English fansubs of it still available on the net for download, if you look closely enough.