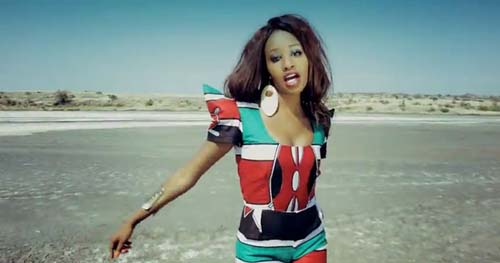 Grandpa Records has slowly evolved over the past year or so and now occupies the spot that Calif Records held on to for such a long time in the mid-late 2000s – the spot reserved for that one label that repeatedly manages to churn out material that is aimed for and successful with the masses. Calif refer to it as “genge” music, I believe. Grandpa Records have proven this with their reboot of their label anthem Fimbo Ya Kwanza, transforming it into the hit that was Chapa (Fimbo Ya Pili). This was swiftly followed by a very successful collabo with Wyre and Amileena in Kamua Leo and the currently popular Hivyo Ndio Kunaendaga by Majirani, Kenrazy and V-Sita. This time, they introduce us to the latest female singer to put out material under the label. Her name is Libby and her first single goes by Rusha Mkono.

Of course, the entire production has the signature Grandpa Records feel all over it, with the usual composition of party-ready beats with a bit of variations here and there to keep everything interesting. However, it is Libby’s entire presence in the track and music video that adds a unique flavour to the rather straightforward production. She does what any new and upcoming artist should in their very first single – a fresh and memorable delivery of vocals that is consistent but also interesting at the same time (that “Me sioni” thing she does at the bridge strangely brought back memories of a younger Nazizi from back in the Necessary Noize days. I’m strange like that).

The video is directed by Convex Media’s Young Wallace, who has handled a majority, if not all, of Grandpa’s video releases so far. The video, shot on an arid location somewhere on the floor of the Rift Valley, does not lack the crisp clean, high contrast look that we have come to recognize Young Wallace for – which is great. However, the vibrancy and energy brought to life in videos such as Hivyo Ndio Kunaendaga is definitely absent in this one. The concept is simply not exploited enough – apart from the use of the arid environment as the perfect backdrop to complement the guy’s “thirst” as Libby shoos him away with a wave of her hand. A little more girl power and perhaps a dance routine should have been worked into the video.

This single is a perfect start for Libby who no doubt has the potential to make her name as Grandpa Records’ leading lady in the label’s quest to push their sound to the masses.