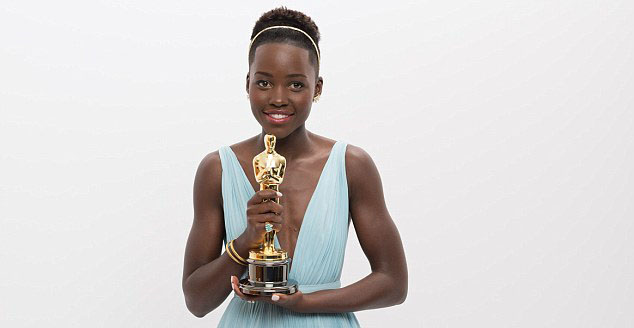 Over the weekend, Kenyan-Mexican Lupita Nyong’o bagged the Best Supporting Actress Award for her role in Steve Mc Queen’s 12 Years A Slave, sparking in one of the most explosive local media and social media frenzies about a foreign/international event since perhaps Barrack Obama’s election as the president of the USA back in 2008. No doubt, Lupita’s epic performance as a sexually abused slave girl demands nothing less than celebration as she joins the growing list of Kenyans and “Kenyans” making big waves internationally. She is now not only viewed as a performer of universal acclaim but also a fashion icon, with designers falling over themselves in the  rush to dress her.

Her long journey from simple beginnings in 1998 as a 14 year old trying to make her mark in local theatre circles right up to the mega star she has become today should also provide us with an opportunity for reflection and assessment of certain issues revolving around the Kenyan film/TV/Entertainment industry:

One of the many highlights of Lupita’s night out at the Oscars was her emotional and gracious acceptance speech which closed with this powerful statement:

“When I look down at this golden statue, may it remind me and every little child that no matter where you’re from, your dreams are valid.”

As Lupita ended her speech just before the break of dawn on Monday (local time), thousands of young Kenyans were probably sleepless in their beds, thinking of what direction their lives would take after the release of their KCSE results later that day. Some of them were also probably, and rightly so, expecting to see their names among the Top Ten Students List on TV. Naturally, they would be hunted down by the media for their own Lupita moment where they would proudly announce to the world that they were on their way to achieving their lifelong dreams of being brain surgeons, actuarial scientists, lawyers, ICT gurus or engineers. I wonder how many were preparing to tell us about their dreams of being actors or musicians, but I digress.

The country has seen decades of a silently institutionalized attitude of parental and societal pressure on children to prefer much more “straightforward” career paths far away from whatever artistic talents they may have. The consensus has usually been that these talents are for what our primary and secondary system label as extra-curricular activities, to mean that they should have no significant bearing on a child’s career path.

The attitude has been based on economic common sense which dictates one must have a means to make a living after gong through education, considering that most families are in the middle to low income brackets. Even Lupita herself recognizes that when she stared out, acting “wasn’t something I saw as an exclusive career path. The industry barely existed…it was something you did after work, an extracurricular thing.” She was lucky enough to be part of a family that went against the grain and supported her inclination towards the performing arts even when it made no economic sense to do so. That was 18 years ago.

Back to the present, now that the film and television industry has grown significantly (by 85% in the last 5 years alone according to the Kenya Film Commission) and the general attitudes towards the industry have changed, that quote from Lupita’s speech begs the question of whether enough is being done to nurture recognizable young acting talent and to groom them for a possible acting career in the future.

Are drama clubs in schools culminating in regional and national drama festivals enough to raise the profile of young talented actors? Does it do enough to hone skills not only in stage acting but acting in front of cameras for TV and film productions? Is there more that can be done to link nurtured talents in schools to actual opportunities in theatre and/or television? A quick example will be made of Daniel Owira who gave a commanding performance of Otonglo Time which earned him national attention, favour with the President himself, a television ad spot and then quickly forgotten altogether after all the random squabbling over who should manage him died down.

Opportunities in the film and television industry appear to be aimed towards adults and do not encourage major teenage or child roles in their productions, perhaps because of not wanting to shape their schedules around kids who have to go to school. This point of view runs systematically from creators to scriptwriters to producers and broadcasters. The result of this has been a gaping hole in local content aimed specifically for teens and kids. Currently, the only regular opportunity local broadcasters provide them with on weekends is the chance to twerk on live TV for music shows.

Is the Kshs. 300 Million fund for initiatives such as the Vijana Film Fund making any effective headway towards making Kenya’s potential for 250,000 jobs and Kshs. 40 Billion in revenues  from the film and TV industry a reality?

2. The State of Higher Education for the Performing, Fine and Visual Arts

While our higher education system is elaborate enough to produce qualified professionals who excel in various fields, the jury is still out on whether we have graduate and post-graduate programmes in the performing and fine arts with adequate facilities and training to produce individuals who can compete globally in these disciplines in the modern age. Lupita Nyong’o had the means and opportunity for an Ivy League education at Yale School of Drama where she graduated with a Masters of Fine Arts and a degree in Film and African Studies from Hampshire College.

While recognizing the Kenya Film Commission’s efforts to come up with a fully fledged Film School and Film Village, the following questions still need to be answered:  Are the Bachelor and Masters degree programmes in performing, fine and visual arts being offered in Kenyan universities at the moment elaborate enough to produce graduates who can compete globally? Do the courses include instruction by and/or practical interaction with actual professionals in the industry? Are the facilities up to date with global standards?

3. Dear Actor, Be Ready for the Long Haul

To many around the world, Lupita Nyong’o seems to have dropped from the sky and in to the Oscars. Bagging your first Oscar for your first major feature film is no mean feat and requires quite a bunch of stars to align for that to happen. However, what Lupita calls her “instinct” to act was not exactly perfect from the time she landed her first proper role in Phoenix Theatres 1998 production of Romeo and Juliet at only 14 years and a student at Rusinga School. Those who shared a stage with her and watched her career at its infancy are not exactly surprised by her meteoric rise to fame.

How the KFCB Transformed Into Kenya’s Morality Mafia – Part I

Her privileged background is almost inconsequential to the focus and individual work ethic she put into her dreams. She did not restrict herself to what she really wanted to do acting but immersed herself in the industry as a whole, first in theatre and then in the film. Her production credits are even more than her acting credits for Pete’s sake! While Kenyans were to first notice her in MTV Shuga, she had been a production assistant during the shooting of the Oscar winning The Constant Gardener four years prior. She later went on to write, produce and direct In My Genes  a hard-hitting documentary about albinism as her Bachelors degree project and acted win several plays during her time in Yale. Her Oscar win is a culmination of years of hard work and sticking to the general direction of her dreams, even though the journey there had many detours.

There are, and there will be many discussions to do with race surrounding Hollywood’s overwhelming reception of 12 Years A Slave (including Lupita’s win).I won’t go into analyzing whether the film’s success at the Oscars had anything to do with a combination of white guilt and white privilege. My interest is more on the sort of roles that will be accessible to Lupita in the future following her win. There was no way the role played by Lupita could have been whitewashed (something Hollywood has been doing for years) – the role of Patsey could only have been played by a black person anyway.

I would like to see her in films playing lead or major supporting roles that are “equally” accessible to actors who happen to be white and not only primarily typecast roles. The running joke on twitter these past few days has been that Lupita should never run into Tyler Perry any time soon, or her career will be under serious jeopardy.

There is no doubt that Lupita’s Oscar win has led to some degree of attention towards Kenya (and Mexico, too bad we don’t make tacos). It has been a rather sour pint in Kenya-Mexico relations these past few days as to who actually “owns” her (sounds like slavery a little bit, no?). Can Lupita’s elevated profile go a long way in benefitting the country in some way, such as promoting Kenya as a tourist AND filming location, as Charlize Theron did through partnering with South African hotels after her Oscar win.

The tourism aspect is a no-brainer but Kenya still has a long way to go in improving our status as a premiere film location as opposed to the standards go-to locations in Africa such as Morrocco or South Africa. Our tax regimes are not only unfriendly to local producers of film and television, they also do a good job chasing away foreign productions that would not only provide employment but also drive in revenue for other sectors.

Devolution to counties also makes things worse what with governors short of imposing levies on the air we breathe. Revenue authorities do not want to budge on the issue of tax breaks and rebates for the film and TV industry despite lobbying by stakeholders who can see beyond the mere shilling. Perhaps it’s time we took a few notes from South Africa’s Department of Trade and Industry?

Congratulations, Lupita! You truly deserve it.