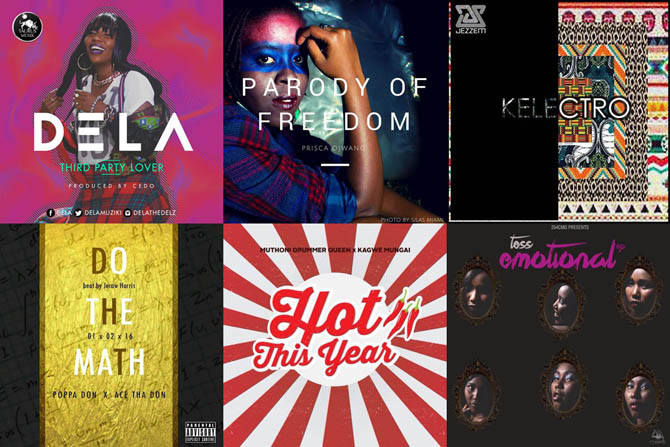 Dela seems to be moving on to the next stage of the story told in Mafeelings with danceable twist in Third Party Lover. She’s moving on and getting rid of her non-committed lover. The delectable beat is produced by none other than Cedo. The music video just dropped as well, check it out above.

Muthoni Drummer Queen and Kagwe Mungai bring in some heat and bass with them for their first track of the year. They are clearly looking beyond countrywide domination, this is about making Forbes lists, fam. The music video could be quite something, we just have to wait and see.

Jezzem has just released a compilation of  new tracks under the title Kelectro. It’s the next installment in his contribution to a growing wave of electric music with a distinctly Kenyan identity. One of the standouts in the compilation is Luhya Lover, a flirty song complete with suggestive references to to tea, chicken, sugar cane and a very sexy flute.

“Work them hard, 6-9  ulitmatum to survive, divide and rule them / Tax them now, bring them down and be with them, divide and fool them” Prisca Ojwang and Elsaphan Njora  hold nothing back in this track about some of the sad truths about this country and this continent: neo-colonialism, a selfish political class and a constantly oppressed people who seem to have given up. It is a powerful message about truth and change that everyone should listen to.

Poppa Don – Do The Math ft. Ace The Don

The two Dons team up for a four-minute math lesson that adds up to a serious head-bopping statement of intent. As they fearlessly proclaim, the hip hop vets had better watch out.

Tess Kihigi’s first EP titled Emotional is out and generously packs in seven tracks produced by Superprodusir and Big Benz. The title speaks for the EP.