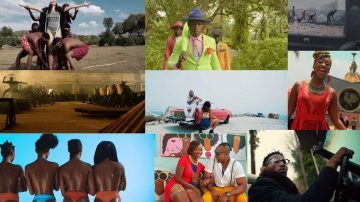 Most of the best Kenyan music videos of 2017 came from artists and directors who looked inwards for inspiration and authenticity. Some have used the realities of life in out cities as the fuel that drives their creative process. Others have shown the endless possibilities that can emerge from re-imagining our past and blending them with ideas about the future. Others were just feats of technical badassery by directors who knew exactly what they wanted to achieve.

A good comedian can successfully go beyond the limits of socially acceptable humor while walking the fine line between the corny and the cringe worthy. Padi Wubonn’s recent batch of parody music videos have tended to find themselves deep in either side of this divide (take the Panda parody for example). However, he achieves some sort of balance on this parody of O.T. Genasis’ Cut It. This absolutely hilarious music video delivers some unexpected satire about the ideas of masculinity attached to ugali, especially now that maize is an emotive subject.

Why Alpha and his team overlooked the potential of the Dandora dumpsite and instead chose to shoot this music video somewhere in Ghana is a question probably not worth pursuing. What really matters is that they end up with a bleak, grey setting that almost feels post-apocalyptic – perfectly fitting for the theme of the song.

While Mayonde and Stonee Jiwee depict an unvarnished reality of day-to-day city life in their Nairobi music video, Rigga offers us a light dose of  aspirational escapism, taking us on a Sunday morning tour of the cleanest and leafiest bits of Nairobi. Such is the double-sided nature of the city in the sun. Pick your poison.

This music video for Tema  Methali is just as enchanting as the its dubstep-inspired beats.  With only two different scenes in possibly the same location, this here is why it is said that a little can go a long way.

Odi Dance became the unusual viral sensation of 2017 and in the process overshadowed Dmore and Benzema’s Ochungulo, the track that resurrected the street anthem aesthetic of Kenyan hits from the early 2000s.

For Kagwe Mungai’s African Lady,  director Stanz weaves together a cute and straightforward love story spanning 15 years or so. Love lives on from countryside to city and from teenage uncertainty to self-assured adulthood.

Mt. Kilimanjaro and the surrounding plains provide a picturesque setting for Nameless’ Inspire, unlocking yet another location (besides the Coast) for filming  stunning landscape scenes.

Given that China is used on this song as a metaphor for everything “fake” or lacking in authenticity, the irony of having the music videos shot on location in China and New York City’s Chinatown will not be lost on anyone. The irony is so glaringly obvious it is difficult to process what Victoria Kimani is trying to say with this music video. Her facemask best summarises it all: no one understands, no one knows what it means, but it’s provocative.

The folks responsible for the concept behind the music video for Petra’s Bambika thought outside the box and came up with a story line worthy of its location – the Bomas of Kenya. We follow a girl on a mission to deliver a party invite to various tribes, having impromptu dance-offs along the way. It is mainly the radiance and enthusiasm of the lead character, played by the talented Maria Mumo,  along with the choreography by Art in Motion that holds this feel good story together. NB: Sucks to be you if you haven’t seen this great music video yet. It seems like it has been scrubbed from the internets for some reason.

Every frame of this music video is an explosion of colour, as Idd Aziz flirts with his love interest. The additional cast of women from Michael Soi’s potrait collection bring a certain flair to the whole thing. Nicely done.

To add more fire to Bonga‘s scathing indictement of an apathetic nation and a spineless media in the face of a deepening political crisis after the 2017 general elections, King Kaka lets pictures do the talking on the music video.  His collage film bringing together images from the disaster that was the 2007 elections and scenes from the just concluded one, King Kaka puts in a further thousand words and more.

After 3 years, Lectronica Circle finally blessed us with a music video for their third outright banger Ang’o featuring Sally Ayugi. What we get is a fittingly African-themed video, complete with the sort of dance moves that you’d expect this song to inspire.

Of late, Octopizzo has not been playing around when it comes to his music videos.  He brings on accomplished DP Russ Fraser to direct the  TBT music video, and the bump in  quality is immediately apparent from the first frame.

Nigerian cinematographer Unlimited L.A does justice to  Umeniwahi with this music video that captures the sunny, tropical vibes of Kristoff’s instant hit. The colour palettes chosen for the scenes and composition of the scenes themselves should definitely have our local music video directors taking notes.

On the whole, Clarence Thomas’ music video treatment of Melanin, Sauti Sol’s  tribute to the various shades of African women’s skins, is fantastically shot. However, the female cast composed entirely of women with skin tones on the lighter side of brown paired with lyrics like “I have never seen melanin so dark” betrays the production’s ironic lack of self-awareness. It’s the little things that can make something so good end up looking kinda bad, depending on the lens you choose to view it with. Those not satisfied will at least find solace in Che Lingo’s Black Girl Magic.

In what appears to be a medicine-induced lucid dream, Yvonne Darcq is teleported to the Maasai Mara and has a mystical experience with her younger self. It is an understated fact that, even after having been part of the local music scene for more than a decade, Yvonne Darcq always finds a way of bringing something new to the table.

Closely reminiscent of the music video to the techno classic We Come 1, the main scene in Hayawani possesses the sketch-like qualities of a theatre production. You are invited to suspend your disbelief and immerse yourself in this world where those who cry peace are the same ones that hand out the weapons of war. Their masks are transparent enough to reveal the monsters hiding beneath.

The narrow alleys of Kibera come alive in this deliciously raw and rugged video by Genreshoots. Octopizzo and his friends project an interesting balance between camaraderie and danger. In the shadows of the back alleys, anything can happen, so you better have your Hood Pass ready.

After working on Blinky Bill and MITYA’s ATIE music video, Andrew Mageto and Osborne Macharia team up once again for this stunning piece of art. Mageto’s manipulation of colour and Macharia’s ability to (re)create out-of-the-box characters come together beautifully, resulting in this afro-futuristic tale. A bunch of dapper sapeurs team up with elders possibly from the ATIE universe for some good old bounty hunting.